I did something yesterday that I have never ever done before.

I went to see a movie by myself.

And I don’t mean the-rent-a-movie, curl up on the couch, kind-of-see-a-movie. No, I actually I took myself to see a movie in a movie theater. gulp. I don’t know why this was such a big deal. I will gladly sit in a coffee shop by myself for hours or go to dinner by myself. Heck, I’ll even travel to a foreign country by myself. But somehow the unfamiliar terrain of going to a movie by myself felt like the epitome of awkwardness.

I know people do it, but this was a first for me. One of my friends swears it’s the best experience to sit by yourself in a big theater and be completely absorbed into a movie. I am not sure if I buy into that just yet. Perhaps one of the main reasons is because I am a “verbal processor” (yes, you can insert the word talker if you like). I like to talk about the movie- before it starts, during and after its over. This probably breaks some common social norms (especially the talking during the movie part) and annoys my friends and family, but its true.

After standing in line to buy a ticket, silently praying that I wouldn’t see anyone I knew, I walked into the theater. I had tried to time it just right, so the previews would have already started and it would be dark by the time I walked in. Low and behold, the previews has started (phew) and it was dark (yessss!) but it was also almost completely full (oh, crap.) I had not prepared for this. I paced back and worth in the back, trying to decide which row of people looked the smallest so I could gracefully squeeze by them without making a scene. Scanning the audience in the dark I found a row in the back corner, and I not so gracefully climbed over two elderly people and nestled down into my seat against the wall. 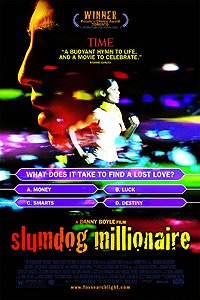 For the next 120 minutes I was thoroughly entertained and impressed by one of thee best movies I have seen in a long time; Slumdog Millionaire. I loved it. It captures the typical rags-to-riches story, but with a beauty and depth set in modern day India. I tend to like these somewhat intense, dramatic films that trace pieces of the human experience in a culture and language different from my own. It’s definitely worth seeing. Maybe even by yourself.