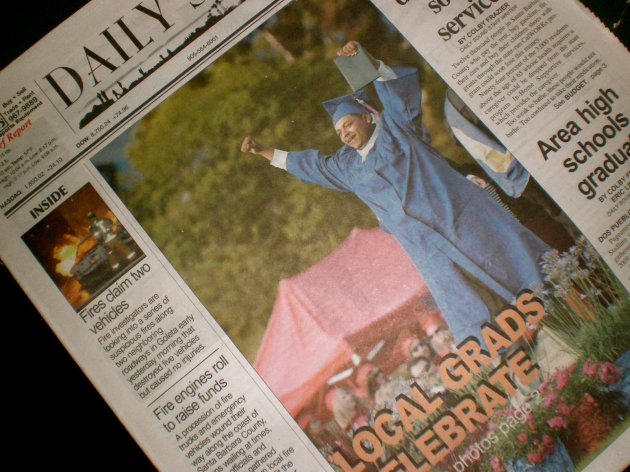 To be quite honest, I don’t normally love graduations. They are long and sometimes boring, filled with cliché speeches and those horrible-why-were-they-ever invented blow horns, but yesterday’s graduation was a highlight of my year. This was my first graduating class from San Marcos. I have had the privilege of working with many of the students who graduated yesterday since they were freshman. That’s four years of teaching, reminding, listening, being patient, getting frustrated, forgiving, yelling, getting frustrated (again), relearning, reteaching and then doing it all over the next day.

Notice, the proud graduate in the picture. I know this kid. I have known him for 4 years. And the local newspaper could not have picked a better picture to put on the front page. This is a guy who hated school. He got in trouble in elementary school and once told me he spent more time in the principal’s office than his own classroom. He spent that past 6 months in my English class and every morning it was like pulling teeth to get him to pay attention. He liked to take 20 min long bathroom breaks and he spent more time sketching in his notebook than answering questions. I argued with him and took a way his cell phone, and often made him stay in at lunch to finish his assignments. I would assign nightly homework and he would moan “aw, ms. acker…I’m over this.” Sometimes I wanted to respond, “well, fine. I am over you too.” But something kept him (and maybe me) going. He finished. He did it. And I could not be prouder. This picture captures it.

For many of my students last night may be the only graduation they ever have. A lot of them go on to City College or start working, but may or may not actually have another graduation. Last night was their time to celebrate. I think one of the joys of my job is that I too get to mark time and celebrate with them- another year is ending, a season is done. I too, get to feel that sense of accomplishments that comes with finishing something. The year is done. Grades are entered. Good-byes are said. Yearbooks signed. Computers shut down. Doors are locked.

Today was my last day.

I love that there are natural markers to my job—clear endings and beginnings. Even though it’s becoming a familiar rhythm every 9 months, I still get a little sad at the end of each year. Don’t get me wrong I will be the first teacher to adamantly claim that “yes, June, July and August are three great reasons to teach” but there is something wonderful that happens between September and May… and that is the something that keeps me coming back.