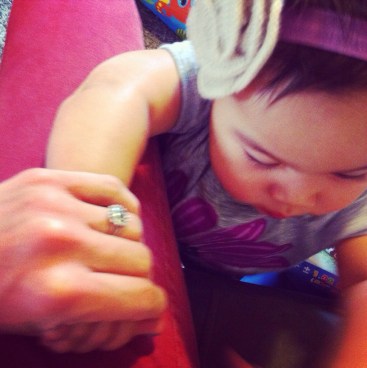 Last week Gerber and I were waiting with Elena for her 1-year checkup. We sat in the shared office space taking turns bouncing her and offering her Cheerios. An older man walked up the stairs and began waving and making baby sounds. Elena stared at him. (which she often does). The he reached over and started tickling her belly. Elena flinched and seemed uncomfortable. Not because he was necessary a creeper, but you could just tell she didn’t know him and felt well…unconformable. Like who is this stranger touching my tummy?

Gerber and I sat there, also feeling somewhat uncomfortable, trying to refocus her attention on the Cheerios and ignore the man.

A few days later we were driving somewhere and I said, you know I don’t why but I didn’t feel very comfortable with that old man in the doctors office.

He agreed, yeah, I didn’t either.

But, I didn’t know what to say. I didn’t have a prepared response in English…or Spanish.

And he didn’t either.

I had read this post earlier in the week by Glennon over at Momastary. And she talks about how often someone will ask her to do something, or volunteer for a project or event and she feels stuck in that moment and doesn’t know what to say so, she ends up saying yes. Not cause she wanted to, but because she didn’t have a prepared response. Have you ever been there? (oh, no..wait, just me?)

And then she makes the connection how our kids or in her case, teenagers, often do the same thing. We give our young ones language when they’re little. We name things and tell them what they’re seeing “yeah, look that’s a doggie.” “yep, a doggie.” “you want, ahh-wa?” “Agua?” “yes, who is that?” Dah-dee.” “yep, Daddy.” We give them appropriate phrases and responses, “say bye-bye.” “say, please.” In essence we are helping them learn what to say and when.

However, she points out that often as our kids get older we forget that they still need our help with knowing what to say, especially in uncomfortable situations. They need us to give them language so they have a prepared response when they get asked something on the spot. She and her husband brainstormed with their pre-teen some actual responses to say when a friend offers him weed. Or when someone offers to drive that is visibly too drunk. They helped him have some prepared responses, so he’s not left just saying, “yes” because he has nothing else to say. For parents who have older kids, you’ll love this post.

But it also got me and Gerber thinking. Right now, Elena can’t really verbalize when she feels uncomfortable or doesn’t like something. It’s our job to protect her and help communicate for her. In general, Guatemalans lovvvve babies and I’ve been pretty lax over the past year about strangers touching her. I never really minded if someone in the park walked over to squeeze her chubby arms or if one of our neighors kissed her head while walking around the block. I just went with it. Elena never seemed to mind and I didn’t either.

But last week, she minded.  And I didn’t have a response.

Now, I am fairy sure that old man was trying to be friendly. He probably even had grandkids of his own.  I know there are weird, creepy people out there, but in general I believe most people are kind and have good intentions. And this man probably was the latter. But it reminded me that I needed a phrase to say, something that’s already prepared, so I don’t have to think when we’re in an uncomfortable situation.

I came up with:

I don’t think she likes it when you touch her. Elena, do you want to show him/her your toy?

This may seem simple, but it was a reminder for me that I need to have something prepared and in this case, in spanish. So I don’t get stuck saying yes or worse, nothing, because I don’t know what to say. As she get’s older I am sure she won’t need to us to point out every doggie or water fountain, but I have a feeling she will continue to need us to give her the language to respond to situations where she feels uncomfortable.

What about you? What do you say when a stranger touches your child and you’re not comfortable with it?

Do you ever find yourself saying yes to people because you don’t have another response prepared?

Have you ever thought about giving your older kid language for how to respond in certain circumstances?